One of Chiang Mai’s most important temples is the Wat Chedi Luang located in the ancient walled part of the city.

The Wat Chedi Luang, also known as the Jedi Luang and “The temple of the Great Stupa” initially consisted of two more temples called Wat Ho Tham and Wat Sukmin, that were all merged into one. 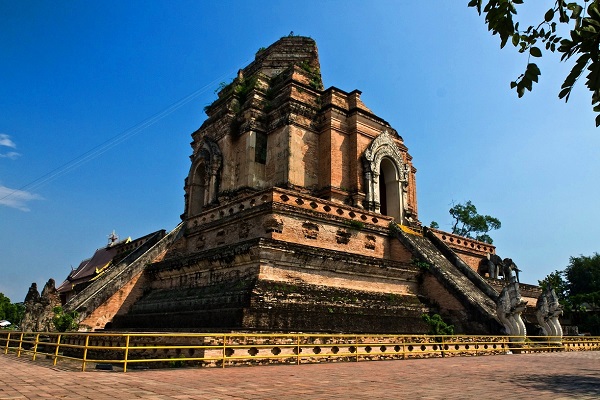 It’s most prominent feature is the massive and very impressive chedi (pagoda) dominating the area. The chedi was ordered by King Saen Muang Ma to enshrine the ashes of his father.

Construction began in 1391 and lasted almost a century. When the chedi was finally finished in 1475 during the reign of King Tilokarat it had reached a height of about 85 meters and a width of 44 meters, which made it by far the largest structure of Chiang Mai.

In the year 1545 disaster struck when a massive earthquake destroyed much of the chedi. The quake took off some 60 meters from the top of the chedi after which about 60 meters remained. In the 1990’s the chedi was partially restored.

The Emerald Buddha image installed in the temple

In 1468, the most important and revered Buddha image in Thailand, the emerald Buddha was installed in the Wat Chedi Luang. The image stayed here for almost a century , when it was moved to Luang Prabang, in current day Laos.

Today, the image is housed in the Wat Phra Kaew in Bangkok. To commemorate the 600th anniversary of the chedi a reproduction of the emerald Buddha was placed in one of the niches of the chedi.

How to get to the Wat Chedi Luang

The Wat Chedi Luang is located close to the center of the old walled part of Chiang Mai. You will find it about half way Ratchadamnoen road that crosses the old city from East to West. The main entrance is opposite Phra Pok Klao road, just South of Ratchadamnoen road.

The temple grounds are open daily from 6 am until 6 pm. Admission is free.