Wiang Kum Kam is a historical site South of the town of Chiang Mai. The site contains the ruins of a 13th century fortified city encircled by moats. The ancient town was rediscovered by chance when local people dug up ancient votive tablets buried in the ground.

Excavations of Wiang Kum Kam started in the 1980’s. The site was cleared of overgrowth and a number of monuments was partly restored by the Thai Fine Arts Department. 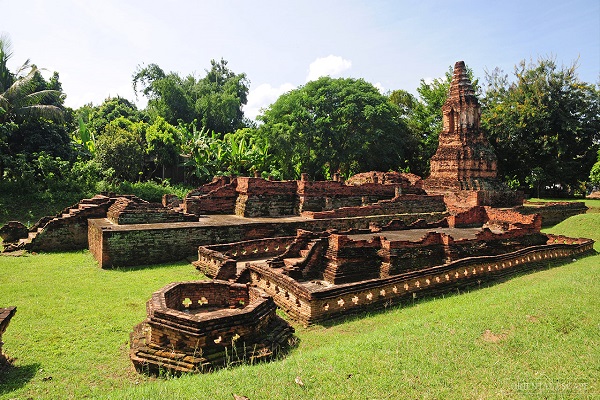 The ancient rectangular town measures 850 meters long and 600 meters wide. Spread out over and area of several square kilometers inside and outside the town the remains of several dozens ancient monuments have been discovered. Traces of the ancient walls and moats remain.

A few temples are still in use today as active places of worship, including the Wat Chedi Liam and the Wat Cham Kam. Part of Wiang Kum Kam’s attraction is the peaceful rural surroundings. The site is much less visited than better known sites as Ayutthaya and Sukhothai.

The town was founded in 1286 by Mengrai, King of the Lanna Kingdom. The wiang, which means “fortified town”, was built on the site of an earlier Mon settlement from the days of the Hariphunchai Kingdom.

Wiang Kum Kam was the capital of the Lanna empire for a period of only 10 years. Because the town regularly flooded, Mengrai decided to move the capital to his newly founded city Chiang Mai in 1296. Wiang Kum Kam remained an important town in the Lanna Kingdom until the 16th century, when the Ping river changed its course. After flooding largely buried Wiang Kum Kam under mud and silt, the town was abandoned.

A total of 42 ancient monuments have been excavated, the majority of which have been partly restored. Most comprise of a viharn and a chedi, surrounded by a wall.

The Wat Chedi Liam is one of the oldest monuments. Founded in 1288, it is known for its stepped pyramid chedi in Mon style, built as a replica of the Mahabol chedi of the Wat Ku Kut in Lamphun. The Wat Chedi Liam is an active temple with a modern viharn and resident monks.

The Wat Chang Kam (Wat Kan Tom) was built in 1290 by order of King Mengrai. That Wat Chang Kam, which translates to “temple carried by elephants” derives its name from its bell shaped chedi with the bodies of elephants protruding out of the base that seem to carry the chedi on their backs, a style similar to the elephant encircled chedis of the Sukhothai Historical Park. The large white chedi enshrining images of the Buddha in its niches is topped with a golden spire. Other structures on the grounds include an elegant recent Lanna style viharn with a multi tiered roof and a spirit house in which the spirit of King Mengrai is believed to live. 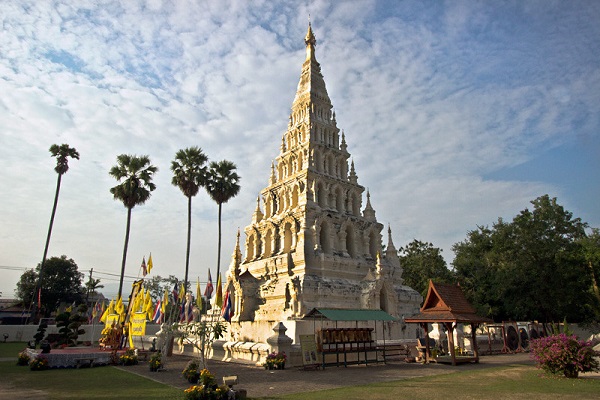 The temple was excavated and partly restored by the Thai Fine Arts Department in 1984. During the works a number of stone slabs inscribed with 13th and 14th century Mon and Sukhothai script were discovered.

The Wat E-Kang is believed to have been built in the 16th century. The temple’s original name is unknown. Local people named the temple after the monkeys called “kang” in Northern Thai, that used to live in the area. The temple was excavated by the Thai Fine Arts Department in 1985. It comprises of a chedi and a viharn, both sharing the same base. The well preserved brick chedi sits on a square base. On top of that are three receding octagonal tiers, a center section with indented corners and a bell shaped stupa. Little more than the base and lower part of the pillars remains of the viharn.

The Wat That Khao or the “temple of the white chedi” was named after its brick chedi that was originally covered with a layer of lime. The temple, believed to have been built during the 16th century was excavated and partly restored in 1985 - 1986. It consists of a viharn, a chedi and a pavilion. The high base, lower parts of two rows of pillars and a stairway remains of the viharn. The brick chedi behind it has collapsed. Next to the chedi are the remains of a pavilion enshrining a large image of the Buddha in meditation posture. The image is a replacement; some remnants of the original brick image coated with lime have been found during the excavation works.

The Wat Pu Pia was excavated and partly restored by the Thai Fine Arts Department in 1985 and 1986. It comprises of a viharn, a chedi and a pavilion used to perform Buddhist ceremonies. Best preserved is the brick chedi, which is in a very good condition. Niches on each of its four sides enshrine images of the Buddha. Very intricate stuccoed ornamentations remain on the arches over the niches.
Getting around in the Historical Park

The Wiang Kum Kam archeological park is too large to be covered on foot. There are several ways to get around. Tours around the site can be made by tram or horse and carriage. Tours take 45 minutes to 1 hour during which stops are made at six to nine ancient monuments. Tickets can be booked at the information center, the Wat Chedi Liam and Wat Cham Kam. Visitors receive a brochure in English with information about the site.

A horse and carriage tour costs 300 Baht carrying a maximum of four people; The fare for the open air tram tour starting at the Wat Chedi Liam is 500 Thai Baht. To get around independently hire a bicycle for 50 Baht at the information center.

The site opens daily from 8 am until 5 pm. Admission is free.